.. that’s its job. I’m not the first to make this observation but it probably confuses most people. ‘Surely,’ they think, ‘education makes you smart or makes smart people smarter ..’ That’s the sales pitch it comes with but the truth is more complicated. The simple answer is: it depends on who is providing it and who it’s designed for. One example comes is that, in Victorian Britain when primary school education was extended to all children, girls and boys were usually taught separately. The boys learned geography because they were expected in many cases to travel abroad in the service of the Empire. Girls often weren’t because it might worry their tender minds if they knew that a bigger world existed beyond the borders of their villages or towns. 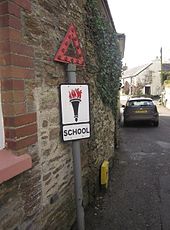 The word ‘education’ comes from Latin and originally meant ‘leading out’ – presumably from the darkness of ignorance into the light of knowledge. Indeed the road sign for a school used to be a flaming torch, signifying just that. However even a slight dip into the history of schooling shows that it was never that simple. Back in Classical-period Greece the great philosopher, Socrates, bemoaned the teaching of reading as undermining the ability of Athenian youths to use their memories. He might have been right but literacy extends what can be known so much that in the modern world it’s hard to survive without it. But, while wider learning was essential for the rulers and their advisors, for the majority of the population all they needed to learn were the skills of their trade. These latter were learned from your parents or your master, if you became an apprentice. Nowadays it’s called vocational training.

With the rise of Christianity and Islam, education became almost exclusively the domain of the clerics and they guarded their knowledge jealously. Thus in moslem countries the Koran is taught to most children by rote and only in Arabic; in christian lands under Catholic control, scriptures were all in Latin for centuries and anyone who tried to translate them into a modern language stood a good chance of getting burned alive. The Orthodox Church controls its scripture in other, but no less thorough, ways. As societies became more complex, it became more necessary to spread literacy and numeracy more widely in the population, but schools beyond the primary level remained by and large still in the hands of the clergy. This remained the case in England and Wales up to the 1870s and in fact there are still plenty of schools designated Church of England or Roman Catholic. In Ireland this lasted well into the 20th century. The purpose of these schools was to create firm believers and well-behaved, compliant citizens. In their alphabetically arranged ranks, children were taught literally to ‘know your place’, whether that was to be a leader or a follower. These ‘faith schools’ are seen by aspirational parents as the better choice for their children than the anarchy of state comprehensives, especially those in the inner cities and other deprived areas. This is put down to their ‘ethos’ – discipline, uniforms, etc – but is more likely a result of better funding, for whatever reason, providing more qualified staff and more equipment.

It should be obvious by now that I’m talking about ‘official’ education, not all learning. There has always been forbidden, occult learning that had to be suppressed – the province of heretics, wizards and witches and celebrated in stories like ‘Faust’. In the colonies of European empires, learning among the ‘natives’ was similarly viewed and, in the case of slaves, often illegal and punished severely. Later on, during the Cold War, teachers in countries newly independent or still fighting their colonisers, teachers were usually the main targets of right-wing death squads. Now those executions are carried out in the name of fundamentalist islam, not democracy, especially if they’re teaching girls. Meanwhile in the USA, it’s the fundamentalist ‘christians’ who are fighting liberal, science-based learning. Education has thus long been a battleground. For the bosses it’s a balancing act between providing a workforce capable of creating and running the ever more clever technology and having a population that’s thinking for itself. Under the Tudors there was an expansion of schools which led, on the one hand, to Shakespeare and on the other to an educated class who fought a civil war and cut the king’s head off. In the 1960s the UK saw the rise, not only of comprehensive education, but also ‘child-centred learning’. While this approach was well supported by research evidence, it was not implemented with any consistency and failures were seized on by Conservative politicians and the right-wing press as proof of its evil. The student-led protests against colonial wars, exploitation of workers and capitalism in general showed what needed to be done – firstly take control of the curriculum, particularly the teaching of history. The under-classes have long struggled to hold on to their own histories and, instead, been force-fed that of kings and ‘patriotic’ wars to keep them compliant with the current world order. Even the Labour government’s 1948 Education Act failed to touch that. In 1988 the Tories brought in the National Curriculum to put the genie back in its bottle. Now they’re dismantling it for their own ‘academies’ and ‘free schools’ to give them more flexibility, but not too much, while blaming their own straightjacket on Labour. Same old, same old ..

But history isn’t the only area of dogmatism and not all the issues are Political. There have been and continue to be struggles in the teaching of languages, especially ‘correctness’ and grammar, literacy, geography – whose viewpoint to take, mathematics – numeracy or understanding and even science – so much has to be accepted as ‘proven’ before you’re allowed to question anything and, if your results or your equations don’t match the ‘right’ answers, you got it wrong. So, as this essay claims, the purpose of education is to make you stupid .. and compliant, uncomplaining, unquestioning and increasingly in debt. In this way the rulers hope to create the ideal population of zombies to keep themselves in power and wealth. When everyone has the chance to learn to think for themselves, the human race may have a hope to survive.

Old school lies - Making Britain great again
It never stopped being great - Great Britain is just the name of the island that comprises most of England, Wales and Scotland. It’s a geographical term to distinguish it from little Britain (Bretagne) in north-west France. So, sorry you Northern Irish Unionists, you’re not British - check your passport! Why the hell else would everyone else in Europe translate Great Britain into their own language? They don’t all think we’re so wonderful.